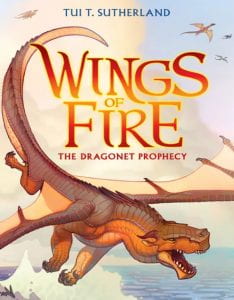 Clay is one of the five dragonets raised in a cave under a mountain, preparing to end a war. But he’s never felt special. All his life, he’s been expected to fulfill this great, world-saving prophecy that will end the war that has been tearing apart Pyrrhia for almost twenty years. But he doesn’t know how to do this! He would be perfectly happy  living quietly the rest of his life with his friends (and plenty of food). But his friends, the rest of the Dragonets of Destiny, want to get out of the cave where their guardians have kept them all their life. Clay isn’t sure how to react — but when the life of one of his friends is put in danger, he knows he’ll have to do whatever it takes to save her.

The Wings of Fire series (the series that this book is the first book of) is just AMAZING. The characters are relatable, and nothing’s ever boring. I would seriously recommend reading this book. I give it 5 out of 5 stars, definitely. 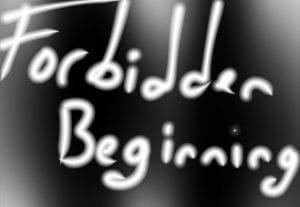 This is my story cover.

Frances Dowell is an author who lives in Durham, North Carolina, and recently, with my LA class, I did a writing workshop with her. I did a similar workshop with my friends last summer — and both times, it’s been super fun, and I’ve learned a lot.

I started by thinking of What If questions. Basically ideas for stories, but like this: What if humans could fly? What if a whole town burned down? What if a huge volcano erupted and everybody in America had to evacuate to other places? Things like that.

Then we learned how to make a good beginning — how to draw the reader in, giving them enough information but not too much. Then it was learning how to make stick and stone problems. Stick problems are little problems, ones that get solved super quickly and easily. Stone problems are harder to solve. They can’t be solves immediately, and and there needs to be some struggle on how to solve them.

After that, we learned a lot more — about the crisis point, the big monster scene, the resolution, things like that. I’m actually pretty proud of my story — it took a long time to write, and I’m mostly proud of my characters. I think I got across their personalities pretty well.

From time to time, we got feedback from our classmates, and that was really helpful. They noticed things I hadn’t noticed, and I think it’s always really useful to have somebody else read your writing, because they’ll be reading it like a reader, not a writer, and everybody has a different view. Frances Dowell also gave me feedback one time, and that was awesome. It made me more aware of what I’m doing right and that I should do that more.

Here is the link to Frances Dowell’s website! https://francesdowell.com 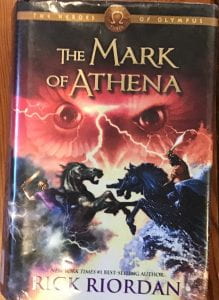 For starters, what is a window or a mirror in this context? Well, if a book is a mirror to you, then the character, plot, or something else is very relatable to you or your life. If a book is a window to you, however, it might be relatable in some small ways, but it’s mostly not very relatable. Most books are probably going to be windows, especially if you like reading books with dragons and spies and magic, (unless you’re a… magical dragon spy, which something tells me nobody reading this is) but not necessarily for everybody.

The book I’m currently is The Mark of Athena, by Rick Riordan. It’s the third book in The Heroes of Olympus series, which is the follow up series to the Percy Jackson and the Olympians series. This book is about a group of seven demigods (people who have a godly parent) who, by the order of an ancient prophecy, have to stop the rising of Gaea, who is, basically, the earth (the ground, not the planet.) I’m sort of scared to say more then that, because even through I could probably reveal more, I don’t want to spoil anything, because there are SO MANY important plot details that are revealed during the book, some in one of the first chapters, some almost at the end of the book.

This book is definitely a window to me — I’m not a demigod, for one thing, (although I wish I was) and I’m also not on a quest to save the world (although, again, I wish I was.) I also don’t really relate to any of the characters that much — they’re all great characters, but none of them are really much like me.

Anyways, this is a great book, I’d highly recommend reading it — although make sure to read the first two books in the series and the Percy Jackson series before you do, if you haven’t already. Thanks for reading! Bye! 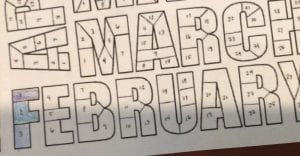 Hi. So, in November and December, I think, my Language Arts class and I did something called Planksgiving. I may have made a post about that separately, but basically we started with a plank for thirty seconds, and every day we added ten seconds. Eventually, we all did our final plank, and I made it five minutes. Which… isn’t that great, but it’s better then I thought I’d do!

And that’s just it. I probably wouldn’t have made it that long, if I’d done a plank every day, or at least I did it most days. And that’s how daily habits help, in a way.

Now, in February, I have a daily habit of writing every day. I’m currently writing three stories, one for LA. I can never remember to write in them (especially my LA one — figures) and I really need to start writing in them more. So, I decided back in January my daily habit would be writing every day, and it still is my daily habit. It doesn’t matter where— if it’s in one of my stories, or anywhere else, that’s okay, I just need to write in some way every day.

I think I just have to remember that in the end, this will really pay off, even if it’s kinda annoying right now.

Well, that’s it for now. Thanks for reading! Bye! 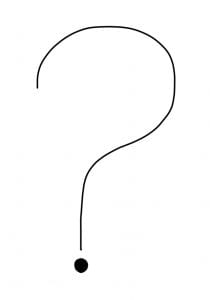 I think I’m probably either an exclamation point or a question mark. I’m generally pretty loud and goofy, and I feel like exclamation marks would be really silly — if there were just random punctuation marks wandering around. Which there aren’t, sadly. But I’m also super curious, and that would be a question mark. I could also see myself as a comma — I tend to leave things unfinished, and a comma never ends things, just leaves them dangling there. But I honestly think I’m most like a question mark — I’m a really curious person, and I’m always asking questions, about everything, even if I don’t say them, I generally have a lot of questions and ideas in my head all the time, probably about whatever is around me or whoever is around me at that moment.

Something I love to do is writing. I really like reading, but whenever I read, I always think, oh, what if that happened? Or, I think the author should have done this here.

And when I write, I get to make stories the way I want them to be. My friends always tease me about how I have so many ideas, and… maaaaaaaaaybe I do have a lot of ideas, and MAYBE I end up talking too much because of that, but that’s only because I have SO MUCH TO SAY! So… DON’T JUDGE.

And with writing, I can create characters, places, I could create a teleporting machine that the protagonist accidentally found and learned that it was from 1852, but it’s super dangerous to use… I can really do anything I want with stories.

And that’s what makes it so cool — that I can make the world the way I wished it was in my story, or if I’m mad, or sad, I could write a scene that channeled that.

Well, that’s all for now — thanks for reading! Bye! 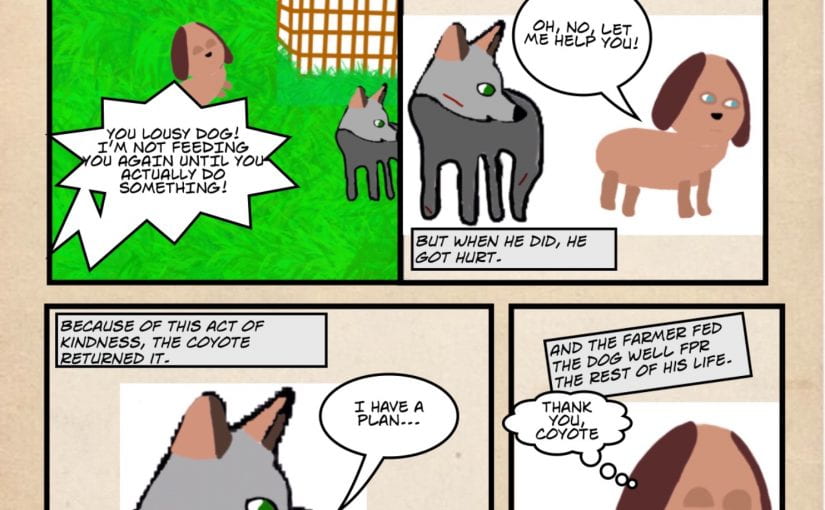 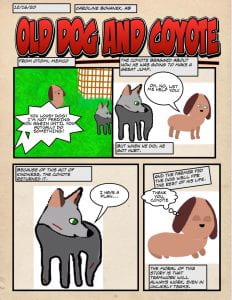 For Language Arts, we were supposed to choose a wisdom tale and make a comic out of it. I chose Old Dog and Coyote.  I chose this because it had been one of my favorite wisdom tales that we’d read. The moral of this story (in my opinion) was that teamwork will work even in unlikely teams.

A wisdom tale is a story that doesn’t talk about anybody specific, so it can relate to anything, and it has a moral.

I created this comic using an app called Procreate for the drawings, and PicCollage to put all the drawings together. Procreate is a great app for drawing, it has all sorts of cool features and pens, so I could draw the grass with that easily, and PicCollage is an app where you can make collages, so I took screenshots of the drawings I made in Procreate and put them together in PicCollage.

This was pretty hard for me, as drawing is deeeeeeefinetly not where I shine, but it was fun, and I learned from this, so that’s good.

Recently, after Thanksgiving break, my school had an all remote week, to be safe, since many people were traveling or had family or friends come in for the break. My school normally does a hybrid thing, where  half the school comes on Mondays and Wednesdays, and the other half come on Tuesdays and Thursdays, unless you’re all remote.

The all remote week was hard, but also easier, in a way. It was hard having call after call after call, but I finished my work earlier then I usually do, so that was good.

We’re going to have another week like this after winter break, and I’m going to try and make it very productive.

Sorry this is so short! Thank you for reading!

With everything going on in the world right now, I think it’s especially important to be grateful for the thing you have. Maybe you don’t like your dinner, but there are some people out there who can only dream of even having daily meals. Just think about things like that.

Of course, maybe everybody tries to be a little extra grateful around now, since it’s almost Thanksgiving. Maybe not.

My family has this tradition where when we’re eating Thanksgiving dinner, we go around the table and say one or two things that we’re grateful for. Maybe other people do something like that, I don’t know.

But, all I’m saying is, please try to be grateful. Not just now, but all the time. Appreciate what you have.